Do you ever feel panic during sleep because the body as if crushed by something but you can not move, scream and woke up?

People called the phenomenon as squeezing as spirits. Int the world of medical disorder is called sleep paralysis (because the body can not move and felt paralyzed). Almost everyone has experienced it. Sleep paralysis can happen to anyone, male or female.

The average age for someone who first experienced for this sleep disorder is 14 – 17 years. This squeezing can indeed take place in a matter of seconds to minutes. This is a normal phenomenon and almost everyone in his life has experienced during sleep paralysis.

Sleep paralysis occurs most often in people who lack sleep because it was triggered by a sense of fatigue, stress and anxiety are excessive. As knowledge, based on brain waves, sleep is divided into four stages.  Stages is the lightest sleep stage (groggy), the deeper stages of sleep, the deepest sleep and REM phase (Rapid Eye Movement). At this stage of REM dreams are common.

When the condition of the body is too tired or lack of sleep, the brain waves do not follow the stages of sleep that should be so from a conscious state (while he was sleeping) and then headed to the lightest stage to jump directly to the dream phase (REM). When the brain is suddenly awakened from REM stage but the body is not ready to accept such reaction, this is where sleep paralysis can occurs.

Most people believe that sleep disorder such as this can be life threatening someone, but it was only the fear experienced by a person excessively because basically sleep paralysis is not dangerous. If you are experiencing sleep paralysis try to stay relaxed and calm feeling paralyzed because later it will disappear by itself.

The ideal way to handle it would avoid some of the triggers causes of sleep paralysis. If squeezing caused by fatigue, you should multiply the break so you do not get tired easily. Try to sleep 8-10 hours a day at the same hour in every night. Keep in mind also, sleep paralysis usually occurs when a person sleeping in the supine position (face up and soundly or nearly in a state of almost awake from sleep). That is why, we need to change our sleeping position to reduce the risk of this sleep disorder.

How to Stop Sleep Paralysis

1. Relax your body into the paralysis. Do not fight it forcefully, as this creates panic and increase the chance of having scary hallucinations.

2. Try to gently wiggle your fingers and toes. These tiny movements will eventually tell your brain that your body is awake and to stop the atonia.

3. Try to move your eyes by blinking and looking around the room. Again, the goal is to establish waking-like movements to fully awaken your brain and body together.

4. Try to move your lips and facial muscles.

5. Focus on breathing as slowly and deeply as you can. If your breathing feels restricted, remember that you have been breathing fine like while asleep for hours.

6. Maintain a calm and positive mental state. Focus on relaxing thoughts. Imagine a beach in the sun, a million miles away from the darkness of your bedroom. 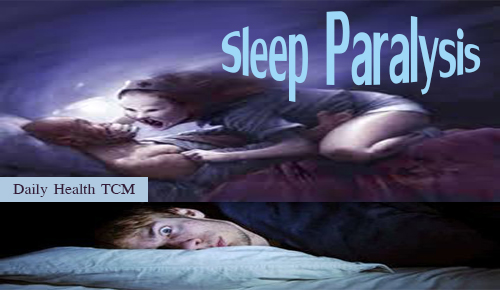