Narcolepsy is a chronic neurological disorder, affecting the part of the brain that regulate when people sleep and wakefulness. This can cause to experience daytime sleepiness excessive and sudden loss of muscle control, often triggered by strong emotions. As a result, this might fall asleep while working, cooking or even driving. These sudden sleep attacks may occur during any type of activity at any time of the day.

Narcolepsy affects about 1 out of 2,000 peoples. It’s relatively rare sleep disorder it is known as an “orphan disease” this means it a disease that affects less than 5 per 10,000 people within a community. Narcolepsy is a sleep disorder which affects the brain’s ability to regulate the normal sleep-wake cycle. This can lead to symptoms such as disturbed night-time sleep and excessive sleepiness throughout  the day. If you make a positive lifestyle changes and seek medical treatment approved, you can help reduce symptoms, increase alertness and enjoy a full and active life.

Excessive sleepiness during the day, is just one of several symptoms that often accompany narcolepsy. Overall there are four main symptoms of narcolepsy:

Hypersomnia / Excessive Daytime Sleepiness (EDS) : Excessive sleepiness during the day despite getting enough sleep at night , a feature of hypersomnia. People with EDS report mental cloudiness, a lack of energy and concentration, memory lapses, a depressed mood, and/or extreme exhaustion.

Cataplexy : The condition in which a person loses control over the functions of the muscles throughout the body gradually. Cataplexy can occur at any time, and in general the reaction is triggered by emotions such as joy, anger, stress, fear or excessive surprised. In cases of severe cataplexy, a person can lose control of the muscles throughout the body until the body becomes paralyzed while, even though the patient remains fully conscious. Loss of muscle function resembles natural process that often occurs in REM (Rapid Eye Movement) sleep.

Sleep Paralysis : Is a condition in which the entire body feels paralyzed that normally occurs during rapid eye movement (REM) sleep, the period of sleep during which most dreaming occurs. This temporary immobility during REM sleep may prevent your body from acting out dream activity. People with narcolepsy often experience a temporary inability to move or speak when waking from sleep. In addition, There is a sense of heavy pressure in the chest as if something heavy being crushed. Although the bodies recovered in a while, most people who experience sleep paralysis feel fear permanent paralysis or even death. 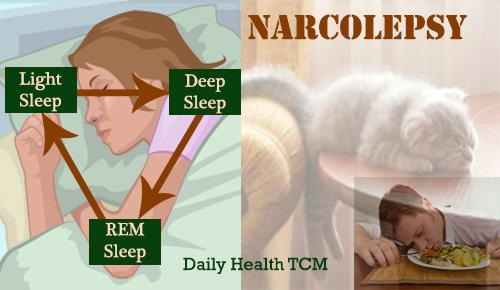